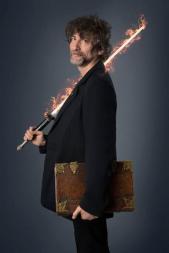 Neil Gaiman joined Claire Armitstaid  on the Telegraph Stage. I was seated in the third line in front of the stage, and my heart was beating wildly. I had in my phone the ebook since february, but I bought the hardback copy of Trigger Warning only a few days before, and I had past my late evenings at Hay reading its short stories in the tent. So, I could not wait for this talk, I wanted to learn something new of the book that had me trapped and entertained so well in the past months. And, of course, I wanted to listen to the wise and charming mage of dreams and words that is Neil Gaiman.

The conversation was immediately focused on Terry Pratchett, (who died on 12 march, last year). Neil loved to share the most exilaranting memories he built with his friend and co-worker of the fantasy realm. He talked about Terry as a magnificent grumpy;  a man with valours that believed humans being worthy of respect and honesty, and who did not forget nor forgive trachery. He was keen to put all of those whom had misbehaved or illtreated him in his Discworld series, as bad characters. Gaiman talked about this grumpy man full of irony and with a great curiosity of how things function or are done. He – said Gaiman – was a fantasy author with the brain of a Sci-fi author. And everyone reads his books.

Neil recalled the year of Good Omens, he told us how this marvellous, funny book came to see the light – or for better saying – the publishers. One day Neil emailed Terry with the first five thousands words of the story, a fetus, really. At the time he was busy with Sandman and other things, and he didn’t imagine his mail would have been replied by Terry with a friendly phonecall : he was interested, yes, and why not writing this four-hands? … “I know what happens next!“, those were his words. Gaiman exposed how Good Omens was written, they write a part, they shared, revised and added some bits to the other’s part, and usually when Terry added at least one or two words to a Neal’s paragraph, it become 70% funnier. As demonstration, he read aloud a page or two of Good Omens (hardback copy  kindly offered by one guy of the public, and immediately signed!).  His voice has something of the ancient narrators, I think. I wanted just to close my eyes and listen with full attention. It was not an easy task for me, without the book open in my lap. Often, when I listen to an Audible performance in english, I help myself with a paperback or an ebook copy, just to understand every word. And, as Gaiman said, Terry loved to write about facts, he loved to write for smart people. Well, I consider myself sufficient smart for an Italian, but I need some time to get smart and well armoured with the english words, especially if I can’t read them, but only listen to. It was not a great problem. I listened, I laughed with the entire room and I also found what were the incriminated words. It was the delivery man passage :

“They’d come here to spoon, and on one memorable occasion, fork” 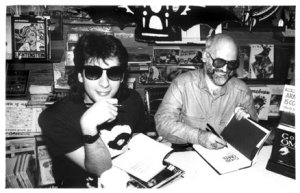 Then Neil recalled the best memory he has of Terry Pratchett. [See here, it’s perfectly reported]

From this relationship between old friend and co-authors, Claire Armitstead has moved on to Trigger Warning, his new book (published last year on february, the 3rd ). It’s a collection of short stories, some old, some new. In the first pages of Trigger Warning the reader will find an explanation, an introduction, about how and when these stories has come to life. He did the same thing in The Ocean at The End of the Lane, and in other works, because when he was young and he wanted to know how the writers do their work, he would often read similar introductions in sci-fi novels. As a young writer myself, I can say that I love to read these intro, and that I find them extremely useful and in some ways …reassuring.

my signed copy of Trigger Warning

Talking casually to the public on the Telegraph stage, Neil Gaiman teased us with the possibility of a TV serie for American Gods. It was the end of May, and we were thrilled  just by the idea, without know that a few months separated us from an official statement by Startz. Imagine me, jumping full of joy, now that the casting has begun ! Meanwhile, we can read Black Dog, the last story in Trigger Warning, a new adventure with Shadow Moon.

Trigger Warning – Short Fictions & Disturbances, is a wondrous collection of stories. Neil discussed the origin and the meaning of some with Claire, as I said.  The Man Who Forgot Ray Bradbury – is about memory loss and lost friends. A lot of Neil’s works are on the problem of memory (see also The Ocean at the End of the Lane). How it is possible to forget of a friend you were close to for years ? Who collaborated with you ? Who, per sè, was so known, so famous ?

The Return of the Thin White Duke is a novel he wrote many years ago for the American Vogue Newspaper, a tribute to David Bowie, which should have had two parts. But only one was written, and ultimately Neil was fine with it.

From the public one girl asked how much is different the final product from the starting idea. And one other asked : how do you know when to finish ? The answer really surprised me, because usually I have an idea of when and how my story has to conclude is journey. He said : “When I can’t play much further with words. When I am interested more in the next thing, the next project “.  One asked : “How do you do the writer?” And he smiled, even if this is a question he answered many times. “You write” he said, very kindly. “You plot an idea, and then write until it is finished. You send your works out. You let your friends read them and you send them online as an ebook, or you send them to a publisher”. It is all very simple, but each of those steps is a milestone for every writer. Exspecially the “finish things” part.

On the importance and the contribution of social media : Neil is very present on Twitter and other platforms (like facebook, tumblr and his blog). The Calendar Tales come from a project with his twitter followers. For every month they were asked to post some ideas/prompt/curious fact. He collected the most interesting and worked on them, untill they become 12 short stories. He read aloud – as we were at Hay Festival it could not be more appropiated – the July Story. Funny, people laughed while he was reading, and I laughed too, but the story itself is very sad. The end is moving, I cryed the first time I read it. I loved listening to Neil Gaiman. It was worth the journey.

@neilhimself asked: “What is the most unusual thing you have ever seen in July?”

@mendozacarla replied: “…an igloo made of books.”