I smell of rain. I have found a seat near the stage, and I can see quite well. Neil Gaiman and Chris Riddell have to arrive, yet. I have to tell, I am freezing. But I am also so excited ! Tata Tent is full of people. I suppose this is the measure of success. Angie and Catherine couldn’t make the Starlight Stage full together, and that was a smaller hall. (Now. This statement is not to say they aren’t great. Or that they are less good. I like them a lot, as you can perceive from my last post. But Neil Gaiman is like Mum Jo and Uncle Stephen. Or Killer George. The Kings & Queens of writers. Like, for the actors, Cillian Murphy versus Robert Downey Jr. They are both great, but you just can’t win over RDJ. And, for the love of Merlin in a pink bermuda, I love Cillian Murphy ! I need to watch Peaky Blinders as soon as possible!. End of the rant.)

I am finally restored, under my tent. The sun is shining, and my heart is a warm, wild, beating creature. The “interview”, or for better saying, the conversation between Neil Gaiman and Chris Riddell – with the (small) support of Daniel Hahn – was spectacular. 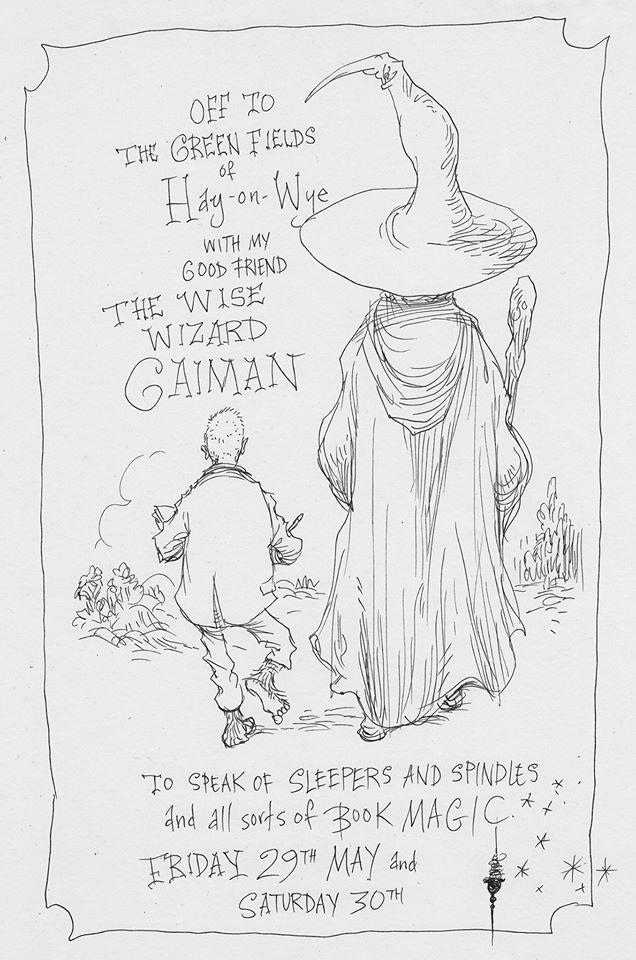 Those two really had their way in entertaining the public. £9 well spent, I should say. They have talked a lot about The Sleeper and the Spindle, a short story written by Neil and brilliantly illustrated by Chris, that has its beginning with the wedding of Queen Snow White. It’s impressive, the twist that Gaiman has produced in this story. At the very start of the discussion, he felt the need to explain himself, (it seemed to me like an apologetic introduction, so usual in the past, but I could be wrong). He told us about how old are stories and faerie tales like these two, and how many times and in how many ways they have been retold and rewritten. For example The Sleeping Beauty in Perrault‘s variant has a second part that we usually don’t remember in these retellings, because it simply has not encountered people’s favor, nor in the past, nor today. So it’s like that : some stories are to be retold and reshaped in many forms, some others are just forgotten. What about Cinderella and its Chinese origins, Ye Xian, or Yeh-Shen  with the golden slippers ? The small feet of Cinderella are a telling detail. Chinese admired small feet in girls, in the way an European probably would have looked to legs, or breast. Like other loved stories, that of Cinderella has travelled centuries and continents. So the golden slippers became glass shoes in Perrault’s tale. Neil reported the mistranslation* of the french term vair, in verre : the fur slippers of the medieval age have changed, apparently for an error, in glass ones. “And aren’t glass shoes ridiculous!?” said Gaiman, among the general laughter of the Tata Tent.

A lot of other things have changed between one version and another, through mouths and pens. It is something that need, to be well explained, of an 800-pages-long book* from my History of Popular Traditions exam, if you wish to go deep in the ancient phenomenon of retelling. Something that nowadays touches another phenomenon, in my point of view, that of fan-fictions.  There are fans that write new stories taking from stories and characters they love,  reshaping them and inventing new characters, sequels and prequels, and then they publish their works online, for their fandom to read, to love, to hate, to judge, to critic, to transform, to reinvent. Then there are well-known authors, like P.D. James, that write actual books taking from unforgettable classics, and that’s the case of Death Comes to Pemberley, a thrilling sequel of  Pride&Prejudice ! Many are the faces and the means of retelling a loved, popular story. It’s something that happens a lot.

So yes, Sleeper and the Spindle is a magic, dark retelling of Snow White and The Sleeping Beauty, with a different ending, or better, with the fanciful imagination of what could be happened after the Happily Ever After. “It is not to affirm that my story is the best version” said Gaiman. Just, this short story, like many other variants*, has its right to be written, and the people have the choice : what to remember and what to forget.

Chris Riddell, seated at his right, was not a silent spectator. While Gaiman was talking, he showed to us the book, with its beautiful illustrations. Then he told his opinion about his work as an artist and illustrator, and about the Sleeper and the Spindle. He is, in my opinion, very funny, a nice man and a great artist. He has been perfectly good at taking every possible space in the conversation and sometimes he has directed the attention on new topics.

They talked about what it means to work together, as writer and illustrator. They recounted some funny anecdotes about their past, and the work relationship they have built , so that many times Neil send Chris some new story, or description, and Chris send some new designed character to Neil (as for Fortunately, The Milk).

Chris said : “my work is to take the space that has been left blank by Neil, that space between lines without words, and elaborate from there. Mostly, it is about taking that little detail that makes the bigger picture. It’s a joy to find these details when I read a new story to illustrate, and the curious thing about illustrators is that we don’t find the same details, and that we can work in very different ways on the same project, but still, I always find the beauty and the inspiration I need watching others works“.  He made the example of Dave McKean, another great artist that often works with Gaiman; author, among other things, of the illustrations for the US version of The Graveyard Book,  The Wolves in the Walls, Coraline, all by Neil Gaiman. I could feel the sincere admiration for him and his colleagues.

He noted the incredible amounts of illustrations that in the years have been published for Alice in Wonderland. 150 years of illustrations for this classic story. All of them very beautiful, stunning retakes on the same concept, (minus the Johnny Deep – Mad Hatter , he said – laughter -).

Then, Neil Gaiman came back to The Sleeper and the Spindle. He answered a question about the absence of princes, men that save the day. It is like this, he said, because he wanted to tell a story with a strong and independent woman. So, at some point, when the dwarves are embarrassed, and I will not say when, the Queen takes the lead, again. And she kissed a Sleeping Beauty… No spoiler. I will laugh to anyone who will shout out at the scandal for that kiss. Oh joy…

Nothing to say, the illustrations are beautiful, amazing. I was a little sad, I could not buy the book there, (I had just bought The Graveyard Book, which I love, and Trigger Warning*, the new book of short stories by Neil Gaiman, I was alone in Wales, and my wallet was screaming in pain, literally starving),  or else it would be now in one of my bookshelves, signed.

Questions were many and interesting.

The audience took Gaiman & Riddell to recalled their worst work. Neil said it was the Duran Duran biopic, first and last commitment he has done for money only. ‘‘I spent three months writing a book that I would not like to read, then the company failed. I lost money, and time. I learned to never ever do something for the only sake of money“. Chris recalled a set of illustrations for a Japanese class of English. He needed the money, too. And as he talked, he began to drawing the frog-girl in manga style, protagonist of this English workbook. The pencil in his hand was moving without hesitation, fluid and precise black lines emerged on white paper. “Last week I received an e-mail from Japan, they ask me permission to reprint the book.” he said, and he was laughing, still slightly embarrassed.

One child asked why Coraline’s hair were blue in the movie, and black in the book. Neil answered sweetly that he was happy of this change, and that it was a last-minute decision of the director Henry Selick, in the making of the movie.

A girl asked one last question, about the women, independent and strong, that have inspired Neil Gaiman. The answer was well-known, because he told many time that his editor and his wife are the women in question. I was expecting it, really, nonetheless it was not so good for me the feeling that he has been leaded to talk about his wife. (I love infinitely Amanda Palmer as a person and as an artist, but that question was so obviously unidirectional …).

All in all, it was a funny, interesting and inspiring conversation. As a want-to-be writer with a want-to-be illustrator for sister, it was a pleasure listening to two professional discussing about their works. I put myself in a hour long queue, with frozen feet in still wet shoes, just to thank them in person. Again, thanks for the dreams and the inspiration, Mr. Gaiman. Thanks for the kindness and thanks because when I confided you my ambition, my own dream, you haven’t laughed, nor with you mouth, nor with your eyes, but you gave me some serious advice.

Neil Gaiman and Chris Riddell have said goodbye with a juicy news : they are working on a new story of Odd*, with Chris illustrations ! (*happydance*)

*The mistranslation of the french term ‘vair‘, fur, that became ‘verre‘, glass, as it was reported for decades, is apparently false. For more, see : World Wide Words : Glass Slippers

*variants : is a technical term for the many retellings of a classic folk story, or fairy tale. So you can read the Grimm variant of Cinderella, Aschenputtel, with the elder stepsister that cut off her toes in order to fit the slipper, but you have to know that there are many other variants that diverge from it. Or Little Red Riding Hood variants.  For more, see : Folklore and mythology Electronic Texts .

*Trigger Warning contains, among others stories, Sleeper and the Spindle, obviously without illustrations.

*You can find an Odd and the Frost Giant version illustrated by Chris Riddell that will be published on 8 September 2016. I think that at Hay Festival Neil and Chris were talking of a different, original story of Odd, that has yet to be written.